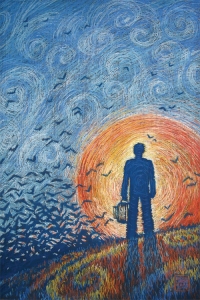 What is freedom? Really?

Lately, I’ve been in a number of heated conversations with European friends who express a huge distaste for the American concept of freedom, pointing to it as a root cause for the excesses embedded in globalism – values and behaviors that have wrecked such greedy havoc on the planet.

But is freedom the problem, or is it a narrow interpretation of our own highest ideal?

This morning I danced at Sweet’s Ballroom. Sound Master Ron Jones played an exquisitely lucid and diverse set. He put on a track sampling Martin Luther King Jr’s “I Have A Dream” speech. At first I listened with a kind of hypnotic rapture. Then, I started thinking….

Freedom – for all of God’s people.

I, too, have this dream.

The unique context of freedom in America is precisely this – that all people can have this dream and can have an opportunity to live it.  This concept has uniquely defined the social justice movement on our planet and will continue to for generations to come.

I am not defending “the American Dream.”  I am not interested in arguing about rights.  There is immense hubris in the privatized, selfish and narrow grasping at freedom that has become the norm for many.  And, the concept of rights itself often overlooks the balances implied between the rights of one group over another – witness the disaser we have gotten ourselves into by giving corporations personhood and all the attendant rights and privileges of the most pampered of citizens.  However, I defend the duty to defend freedom.  I defend the duty to be for and uphold the values of freedom and justice.

Listening to the music and moving body and heart, I let my mind travel to a talk that sacred activist and environmentalist Belvie Rooks gave on Thursday night, telling us tales of the cold and barren “door of no return” where countless thousands upon thousands of kings, queens, mothers, daughters, sons, fathers, aunts and uncles of Africa were shoved onto ships and ferried to death or servitude. They traveled a route so greusone that for hundreds of years, the shark migration patterns in the Atlantic shifted to follow the death ships.  What price did they pay?

Spiritually, it is both an invitation to transcendence, and a calling to embrace whatever is. For, we can not really control anything but the way we respond to life.

And THIS is where the concept of freedom gets deep. For, we can not have a meaningful freedom without responsibility. We can not expect to be free people if we do not act towards the freedom and enoblement of others. We can not hope to live the dream if we do not address where we place our bodies, our planet and other people in bondage through our choices.

So. I have a dream.  I dream, in the vast web of inter-dependent life, that we all choose to co-create a world within which all of god’s creatures can be free.

Stars blanket the mid-pacific sky in quiet intensity, testifying to the immanence and abundance of light that makes up the fabric of our universe.

I raise my head to the night.  Breathe.

Stars implode into black holes and dissolve into other universes.

My life work is to embrace and grow through my fear.

Hey friends and subscribers. We're moving all this great content and more to the brand new SamanthaSweetwater.com. I look forward to continuing our conversations there!